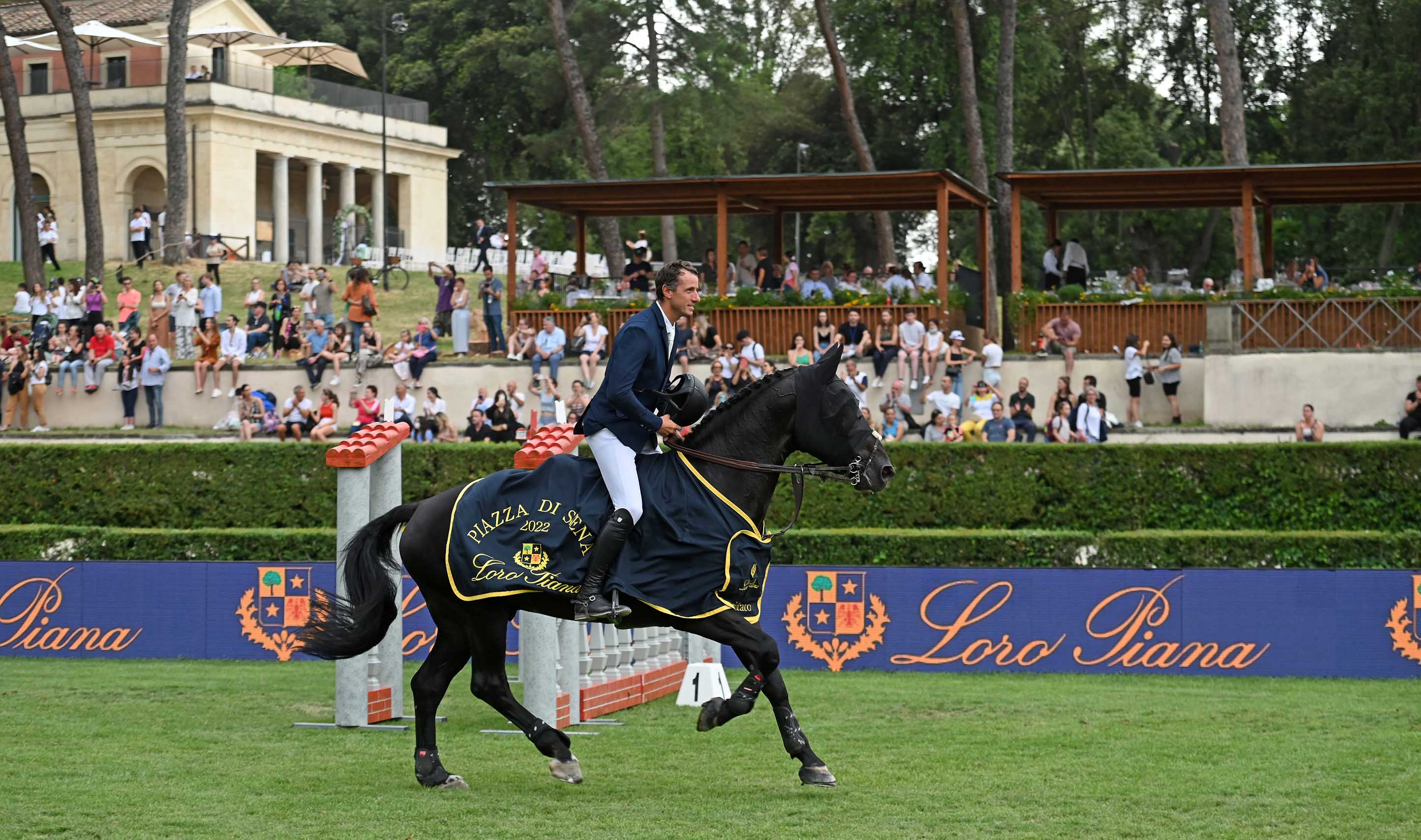 With a thrilling ride down to the final fence that had spectators gripping their seats, Gregory Wathelet and the fabulous stallion Iron Man van de Pandenborre galloped away with the Loro Piana Trophy at CSIO5* Rome - Masters Fratelli d’Inzeo at Piazza di Siena this afternoon.
The 65-strong start-list was whittled down to 14 for the timed round, and, ninth to go, he was chasing the target of 37.32 seconds set by Belgian team-mate Jerome Guery and Margriet de Mariposa. A tight left-hand turn to the vertical at three set him up for a good run down to the two remaining elements of the Loro Piana triple combination, and by the time he turned for home two fences later he was already well in touch.
But he needed all the courage and determination that only the bravest of brave horses possess when he put his foot to the floor coming down to the final vertical, and Ironman didn’t disappoint, the crowd roaring their approval when the pair raced through the timers to take the lead in 36.97 seconds.
Frenchman Roger Yves Bost separated the two Belgians when snatching runner-up spot with Ballerine du Vilpion who posted a time of 37.15 seconds, but it would be Wathelet’s moment in the spotlight in the prizegiving ceremony.

Courageous
Talking about his courageous horse, the man who won team bronze at the Tokyo 2020 Olympic Games and whose hugely impressive career record also includes individual silver at the European Championships in 2015 said, “he’s not the quickest but he has experience. I knew I had to take some strides out to get the best time for sure, before the double I did one less than the others, it was a bit risky but I knew I had to do it because the others would be fast also, but of course at the end the result was very close.
“Ironman is very powerful, he’s careful, he’s just a massive horse and he’s by Darco but he’s not difficult to ride, he just has the power and wants to get to the jump!”, he explained. “I know him for years, he’s 14 now and he has done many good things in his career”, he added.

Trust
And he talked about the trust the top riders build that allows them ask for that extra effort when it is needed. “We build up the partnership over months and years, when you do some jump-offs you miss but you have to try because if you don’t try you cannot win! Today it worked well and that’s our sport, but for sure you have to trust each other and to know each other well - the horse has to fully focus on the jump and go with you, otherwise you have no chance”, he explained.
He is on a bit of a winning streak right now. “Yes these months have been quite good, we were third in the Grand Prix at La Baule where we won the Nations Cup, yesterday we were second in the Nations Cup, at Windsor we won the Grand Prix and today another win - I hope it stays like this for a while!”, he said. And he’s really looking forward to tomorrow’s Rolex Grand Prix in which he will ride his Olympic horse Nevados who has had a busy, but very successful few weeks.
“He is in good form, and after this he will have a rest for a while so I hope he goes well”, he said.