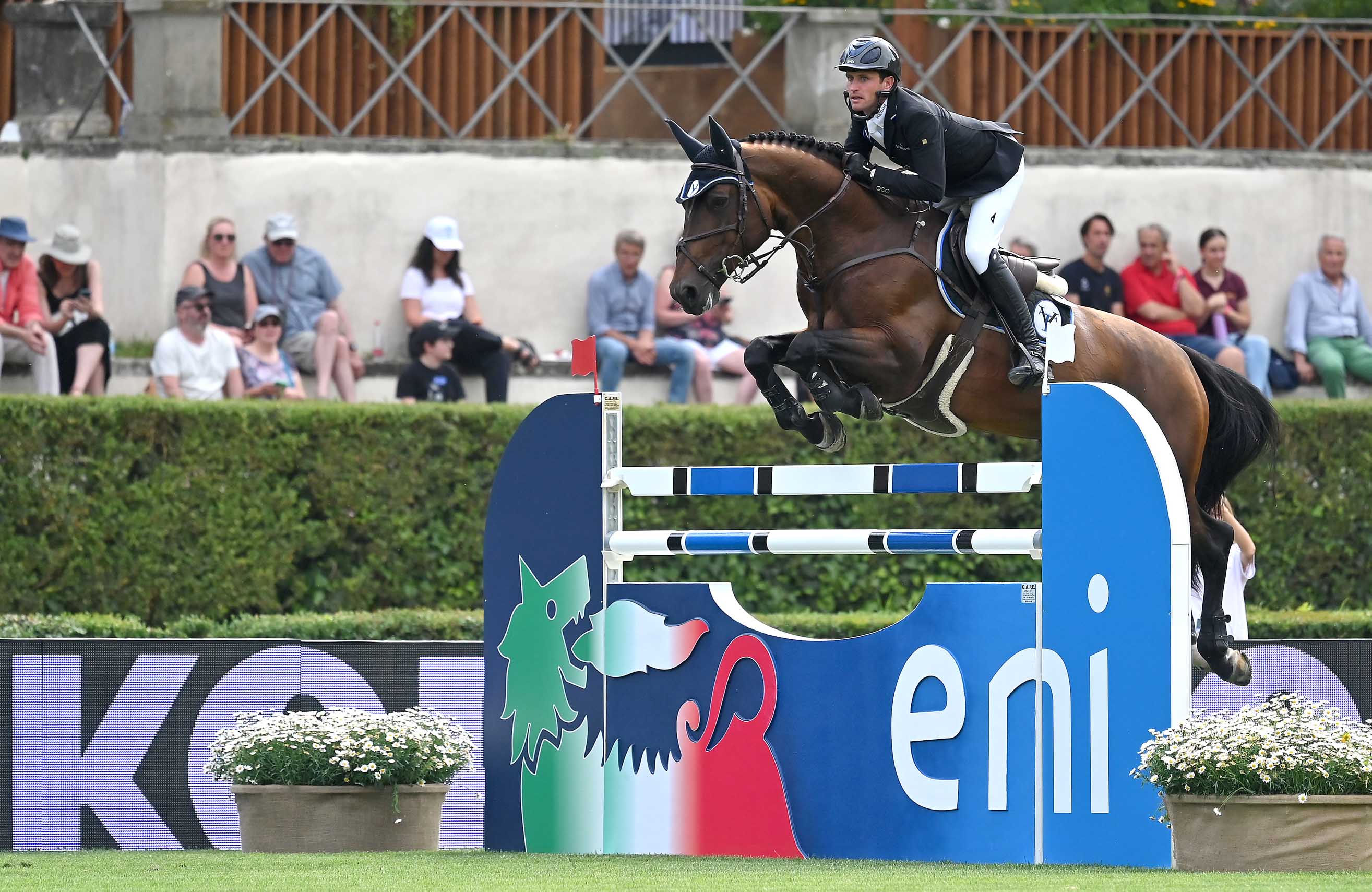 Kenny puts Ireland top of the podium in the ENI speed

Team Ireland got a big boost when Darragh Kenny claimed the honours in the biggest class of the first day, the 1.55m Table A presented by ENI at CSIO5* Rome - Masters Fratelli d’Inzeo 2022 at Piazza di Siena this afternoon.
Riding the 13-year-old French-bred stallion Volnay du Boisdeville he galloped through Uliano Vezzani’s course with consummate ease to oust the host nation’s Giulia Martinengo Marquet from pole position and held on firmly for the win.
The always fast Frenchman Simon Delestre and the nine-year-old gelding Dexter Fontenis looked set to threaten when second-last into the ring and, despite an unintentionally wide turn to the double at fence three, still raced in to finish third while The Netherlands’ Jur Vrieling slotted into fourth with Fiumicino van de Kalevallei. Best Italian was Emanuele Gaudiano who steered the always extravagant Chalou into fifth place.

Chasing
Kenny was chasing Martinengo Marquet’s time of 61.89 seconds when 48th to go in the field of 64 starters. “I wasn’t expecting to win but I think my horse is naturally very fast, I had a good plan with what I wanted to do and it came off pretty much exactly the way I wanted it to….he’s an incredible horse and he jumped fantastic today so I was really happy with the way it worked out!”, the Irishman said after shaving almost a full second off the target time when breaking the beam in 60.96.
The 13-year-old stallion was previously competed by his student Teddy Vlock who competes for Israel. “Teddy rode him for three or four years and had great success with him jumping Nations Cups and 5-Star Grand Prix classes and I took over the ride at the end of last year and he’s been fantastic with me also. He won a 4-Star Grand Prix in Wellington, he was placed in the 5-Star Grand Prix in Miami and now he has won the 1.55m class here”, Kenny pointed out.

Fondness
He has great fondness for the venue at Piazza di Siena. “The first time I ever jumped on an Irish team was here when I was 20 or 21 years old, it was my very first Nations Cup so I’ve been here a few times and it has always treated me very well!”, said the 34-year-old who currently lies 16th in the world rankings and who, along with America’s Hardin Towell, carves out his showjumping career under the banner of Oakland Ventures with bases both in the US and Europe.
“Piazza di Siena is an incredible venue for a horse show and one of the nicest shows of the year. We’ve struggled as an Irish team to win here but I think we have a strong side this year so if everything goes our way I think we have a very good shot!”, he said, looking ahead to tomorrow’s Intesa SanPaola Nations Cup.