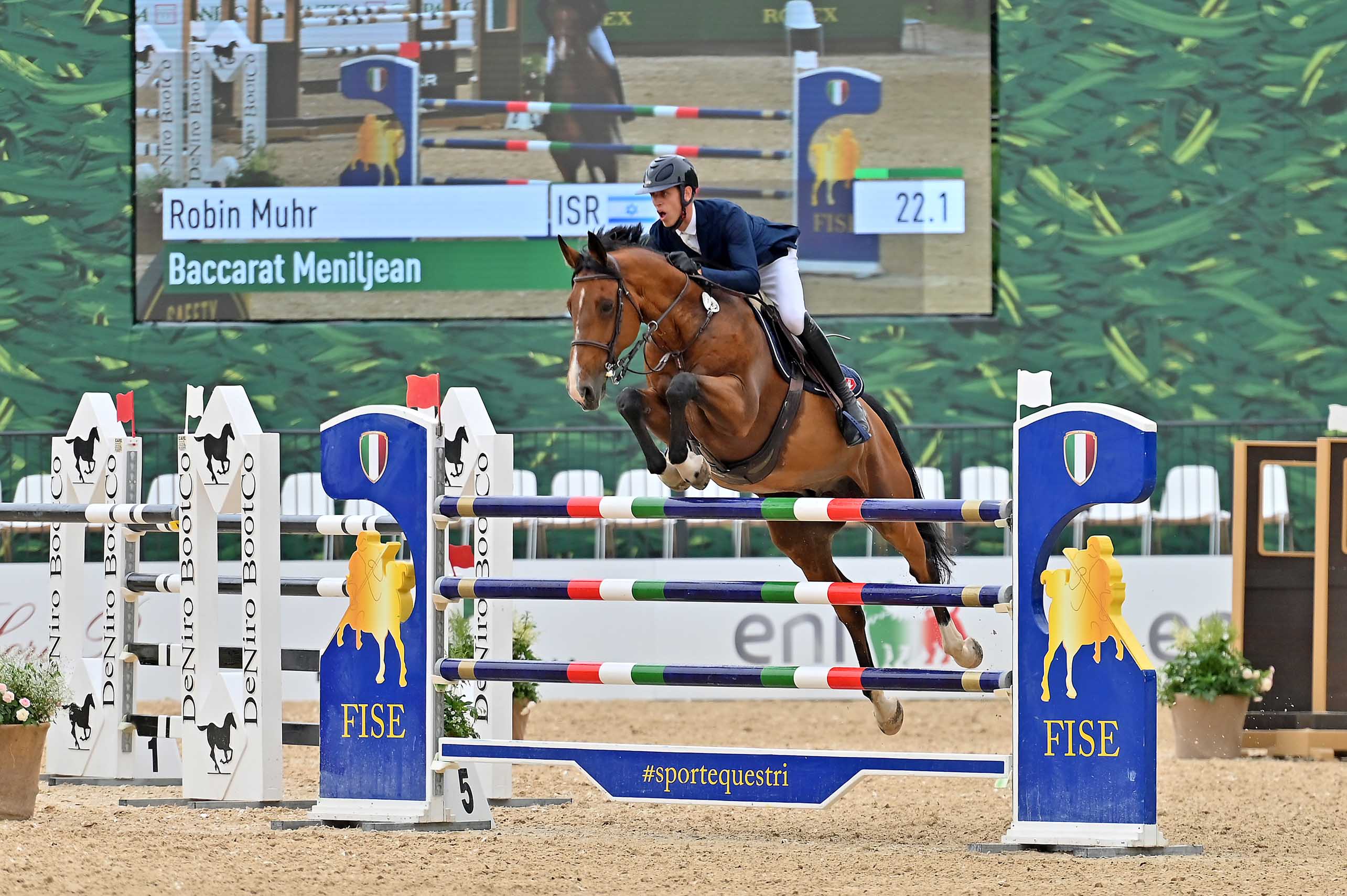 The national anthem of Israel was the first to be played at CSIO5* Rome - Master Fratelli d’Inzeo 2022 at Piazza di Siena this morning when Robin Muhr scorched to victory in the opening class, the FISE 1.45m Speed.
Last to go in the field of 56, he was chasing the super-fast time of 58.34 seconds set by Italy’s Filippo Bologni and his evergreen 18-year-old stallion Quidich de la Chavee who have a long history of success in this particular competition each year.
No other horse-and-rider partnership managed to break the 60-second barrier until the Israeli rider set off with his 11-year-old gelding Baccarat Meniljean, and the spectators surrounding the Gallopatoio arena were aghast when the clock showed 58.22 seconds as they raced through the timers to snatch the last-minute win.
In a truly international line-up it was French veteran, Roger Yves Bost, who slotted into third place with the 14-year-old mare Urane while Italy’s Massimo Grassato slotted into fourth with Belly Dancer RS, America’s Brian Moggre and Gelano finished fifth and Great Britain’s Donald Whitaker and Little Khira H finished sixth.

Delighted
Muhr was delighted and even a little surprised to find himself in pole position, especially because he didn’t put his horse under full pressure today.
“He’s a really fast horse, and right now he’s in really good shape so I’m very happy. It was not my plan to win but to just try my best without pushing my horse because he has to jump tomorrow as well, so I’m very pleased with him!”, said the French-born rider who joined the Israeli team four years ago.
Talking about Baccarat Meniljean, the man from Aix-en-Provence explained, “he did his first 5-Star three weeks ago and was good. In general when he is clear he is in the five best”.

Previous best
Muhr’s previous best performance was also at Piazza di Siena three years ago where he finished in the line-up of the Small Grand Prix on his personal 5-Star debut, so his victory this morning was another big moment.
“I have won the first competition and I hope I can win the last!”, he said after today’s prizegiving, referring to Sunday’s CSIO finale, the €450,000 Rolex Grand Prix.
He’s hoping to partner the 10-year-old Stawita PS in that competition which he sees as a great test for his mare with an eye to selection for this summer’s FEI World Championships in Herning, Denmark. “It’s an important time for horses and riders in the lead-in to the Championships so we want to do well this week, but first we will see how Stawita is feeling later today”, he said.