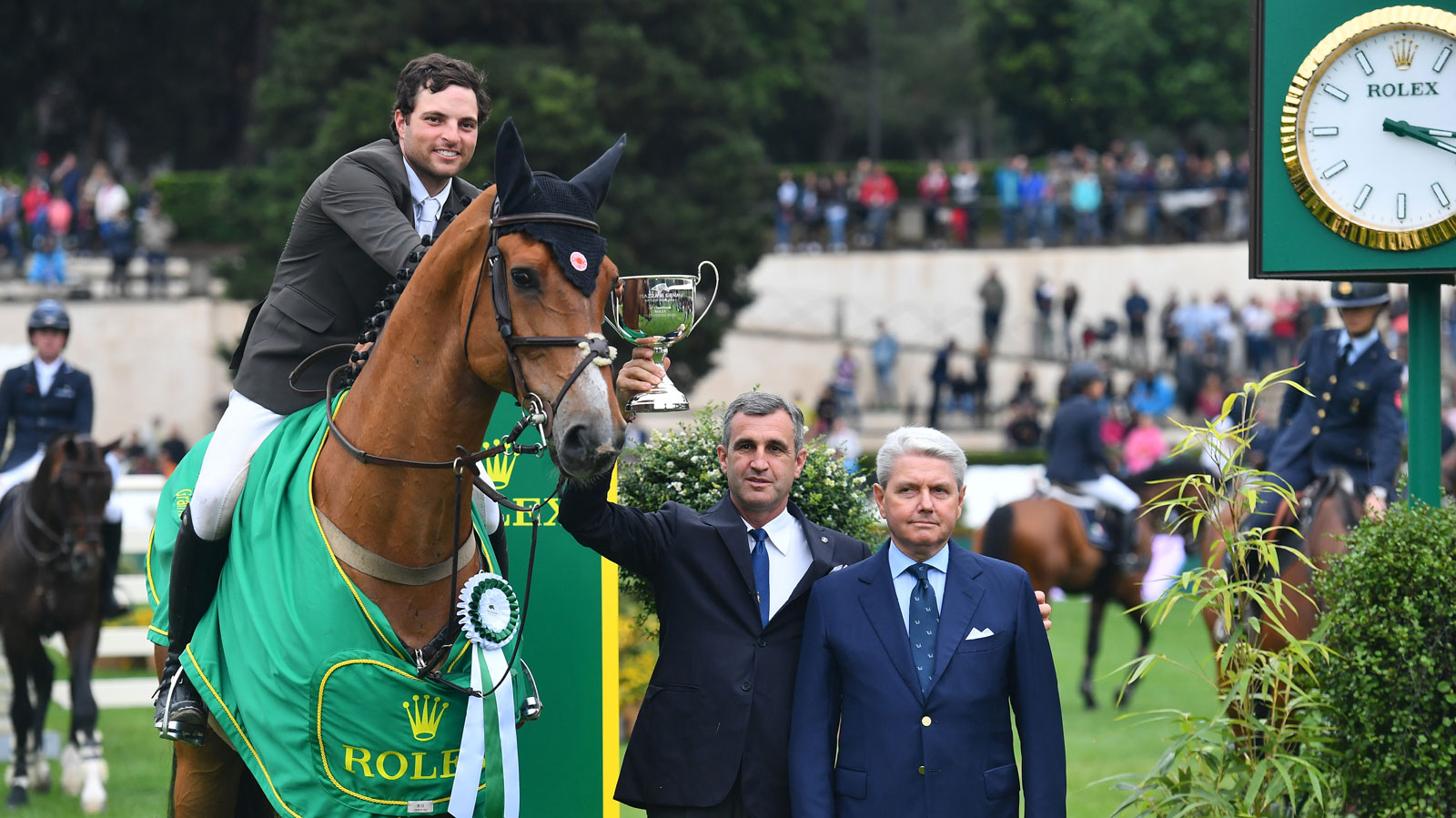 Daniel Bluman made history when posting Israel’s first-ever victory in the €400,000 Rolex Grand Prix at CSIO Rome Piazza di Siena today. From a starting field of 44 horse-and-rider combinations, the 29-year-old rider was one of only four to jump clear in the first round. And with the fastest zero score in round two he carved his name onto the prestigious Roll of Honour that dates all the way back to 1926, thanks to a brilliant performance from his 11-year-old gelding, Ladriano Z.

Last into the ring, Ireland’s Cian O’Connor had to settle for runner-up spot with Irenice Horta when more than a second slower, while Belgium’s Olivier Philippaerts finished third with H&M Extra when also double-clear, but another second off the winning time of 39.47 seconds.

Bluman was bursting with pride. “It feels fantastic - I’m still trying to understand what just happened!”, said the man who enjoyed considerable success when competing under the Colombian flag until the end of 2016. “This is an incredible venue and my favourite Grand Prix, so to be able to tick this off my bucket list is just amazing - it’s going to take some time to sink in just what this victory means!”

Belgium’s Olivier Philippaerts kicked off the competition with a clear round from H&M Extra, but only three others could match that. The home crowd were delighted when Luca Marziani and Tokyo du Soleil followed suit, and then O’Connor and the grey mare which was formerly ridden by Italian star, Lorenzo De Luca, also kept a clean sheet before Bluman and Ladriano Z, last in the first rotation, made it look pretty easy.

The riders with the best 11 scores returned in the second round and, having collected just a single time penalty first time out, America’s Jessica Springsteen looked set to pile the pressure on those ahead of her when fifth-last to go. But she mis-timed her ride to the second fence with Fleur de l’Aube and crashed through it before retiring, so first-round four-faulter, Ireland’s Darragh Kenny, started moving rapidly up the leaderboard after his fast second-round clear.

Philippaerts was foot-perfect once again and set the target for the remaining three in 41.75 seconds. But Bluman immediately relegated him when bringing his 12-year-old stallion home in 39.47. And when Marziani hit the second-last the crowd groaned. Now only the 2012 Olympic bronze medallist, O’Connor, stood between the Israeli rider and victory, and when the Irishman posted a time of 40.64 he had to settle for runner-up spot ahead of Philippaerts in third and Kenny in fourth place.

Bluman said, “I had a good feeling about this class, I was pretty confident because I’m riding one of the best horses in the world who has proved himself time after time. Ladriano has so far been clear in almost every Grand Prix he has jumped this year, and he has placed in every Grand Prix he has jumped since last September. So he was coming here on very good form. After the Nations Cup in which I had one rail down in each round, I almost thought to myself that the way the statistics play out normally he should jump a clear round today. But of course you always need a bit of luck!”, he pointed out.

Born in Colombia, his family moved to Florida, USA when he was 10 years old and he competed under the Colombian flag, including at two Olympic Games and two World Championships, until deciding to compete for Israel. And suddenly this week he and his Israeli colleagues look to be gelling into a real force to be reckoned with.

Talking about the establishment of the Israeli team he said, “we started working on this project two years ago, and we have a group of unbelievable riders. Israel is going to be one of the strongest nations in the sport in time, and it’s great to have Hans Hoorn and Jeroen Dubbeldam as our Chef d’Equipe and trainer - we are getting better and better!” said the man who has bases in Florida, New York and Brussels.

He was presented with his Rolex prize by Gian Riccardo Marini, President of Rolex Italy. “Piazza di Siena is a spectacular event, to be honest it couldn’t be better for many reasons. Rolex is behind it and they bring a level of prestige to any event - plus you also get a Rolex watch!” he said with a big smile.

Asked if he’d like to dedicate this win to anyone in particular he was taken aback. But after some thought he said “two men who have previously won this amazing competition are in my mind right now. I’m not dedicating this to them, but I’m thinking of Nelson Pessoa and Eric Lamaze...” Ph Simone Ferraro/CONI