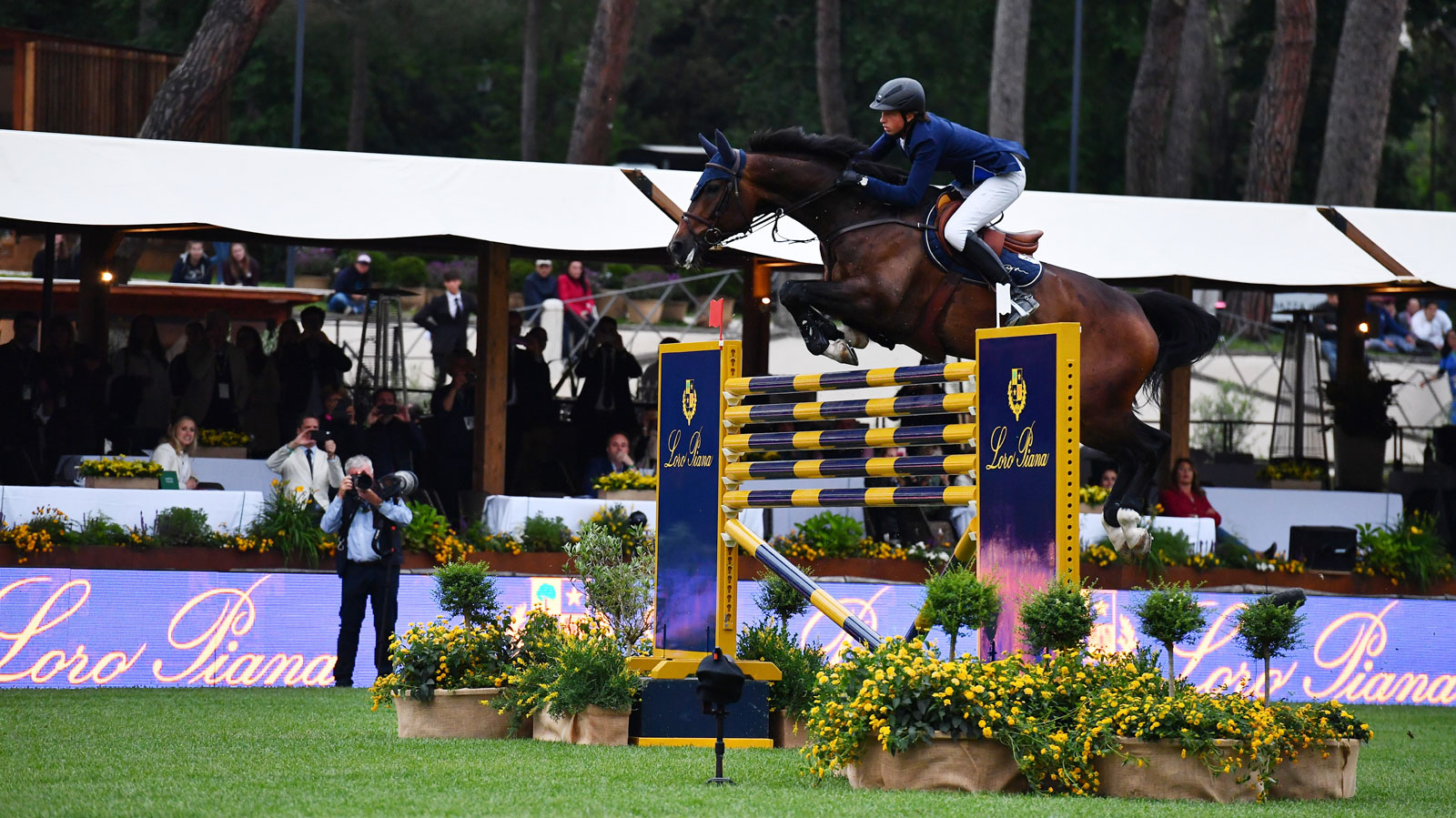 Yesterday, Switzerland’s chances in the Intesa Sanpaolo Nations Cup at CSIO Rome Piazza di Siena were dashed by elimination for Martin Fuchs and his horse, The Sinner. Today however the 11-year-old gelding redeemed himself in style when winning the thrilling Loro Piana Six-Bar when he was the only horse to clear the 2-metre final fence in the fifth round.

“He is quite a new horse for me, I don’t know him that well yet. Yesterday it was definitely not our day, there was a misunderstanding in the Nations Cup. He was very good until that point, he felt like he was going to jump a clear round, but then he didn’t really understand what I was asking him. So I’m happy that today we worked better together”, said the World No 5 rider who claimed individual silver at last year’s World Equestrian Games.

The starting field of 15 horse-and-rider combinations was reduced to just four by the last jump-off, and although Italy’s Natale Chiaudani and his fiery grey, Belly Dancer, had made it look easy in the previous rounds, they couldn’t quite find their rhythm this time out and the final massive upright fell for four faults.

Fuchs was next to go, and The Sinner was perfect right to the last. He cleared it with his front legs but his hind feet tapped the top pole and it jumped into the air. However it dropped right back into the cups, so the excited crowd roared with approval as the Swiss pair cantered through the finish with a zero score. And when the last fence fell for Edoardo Tommaso Fochi and Qaro Dan, and then Andrea Venturini’s Deauvil hit the second-last before refusing at the last, it was to be a Swiss victory for sure.

Fuchs was delighted with The Sinner’s performance. “He has jumped a lot of rounds today, many verticals, and he only had one rub in the last round so I guess that’s pretty fair. He’s a great horse, super careful, all the scope, not the best rideability but when I get to know him a bit better I think we can be a good couple!” he said.

He was actually quite confident that the horse would do well in this competition. “The Sinner has jumped a few Six-Bars and won them with his former rider Denis Lynch from Ireland. I also had Denis on the phone yesterday, and he told me you have to do the Six-Bar - he jumps 2 metres every day easy, so I believed him and he did!”, Fuchs aded.

He’s only had the horse for five months “and for three of those I was in Wellington (USA) and my dad was taking care of him. So he almost knows him better than I do!” Fuchs explained.

He won’t be competing in tomorrow’s €400,000 Rolex Grand Prix. “The Sinner was my option for that, but since yesterday we didn’t have a great round I chose to not compete tomorrow. Obviously I’m very sad about that, but it just makes sense with this horse to give him a bit more time and to be stronger for next year”, he pointed out.

He was mobbed by fans looking for selfies and autographs after the prizegiving tonight. “Here in Rome they really like the Six-Bar competition, Loro Piana have sponsored it for many years. It’s kind of a tradition, so obviously that’s really nice for me to be here in Piazza di Siena and to win it. This is an amazing show, it’s my first time here and it’s great to go home with a win!” Fuchs concluded. Ph. Simone Ferraro - CONI