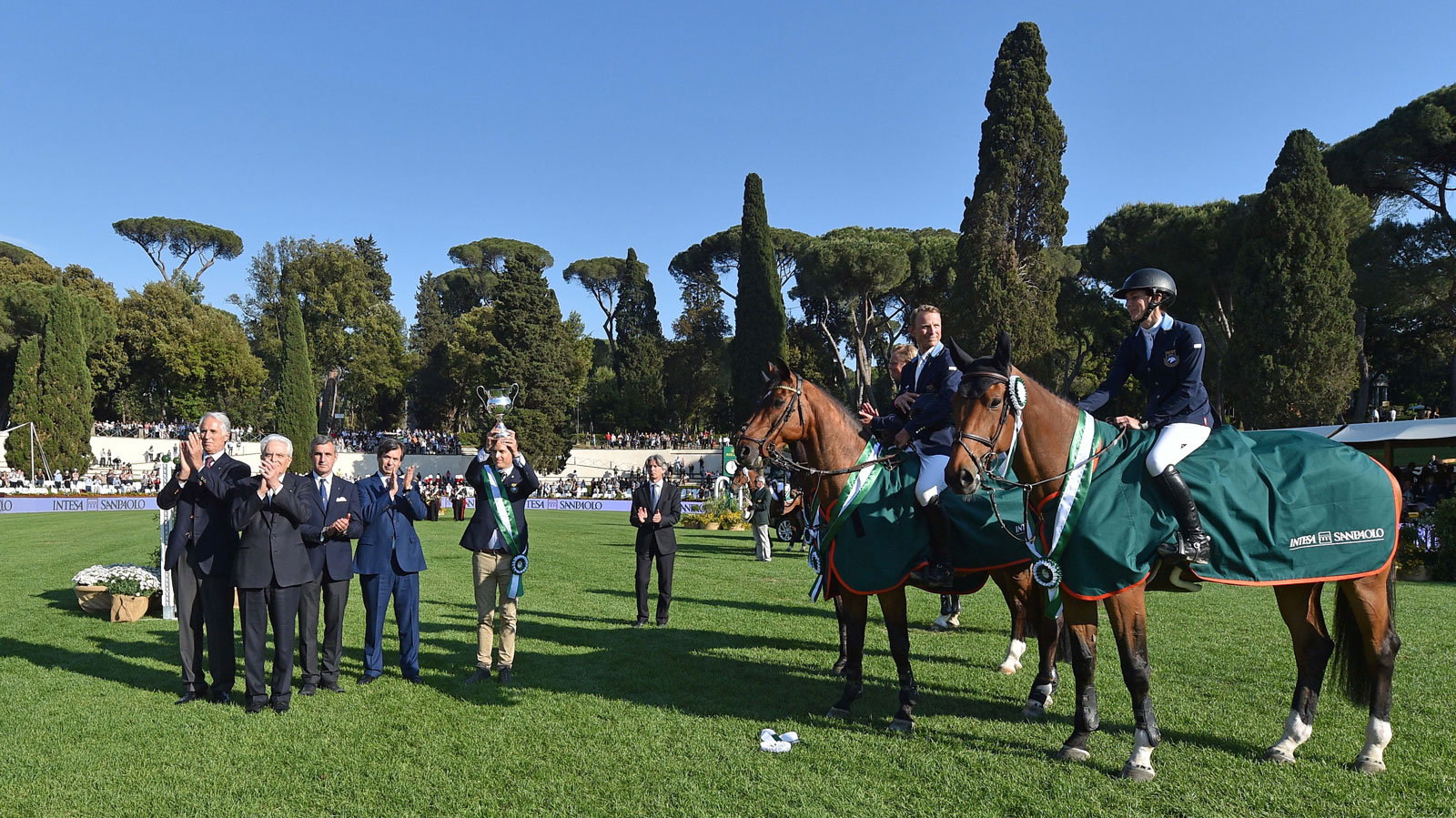 Team Sweden posted only their second victory in the long and distinguished history of the Nations Cup at CSIO Rome Piazza di Siena today. On an afternoon that produced plenty of drama, the single double-clear of the entire competition came from their pathfinders Henrik von Eckermann and his brilliant mare, Toveks May Lou, as they topped the leaderboard in the Intesa Sanpaolo Nations Cup with a final score of eight faults.

Runners-up were Team Ireland, determined to end the drought that has kept them from the top step of this prestigious podium throughout the 87 editions of the great event that dates all the way back to 1926, but it wasn’t to be. They were neck-and-neck with the winners going into the second round this afternoon, but when they faltered the Swedes held on tight to pip them by a four-fault margin.

The Netherlands and Belgium lined up joint-third on a total of 18 faults while Italy finished fifth on 23. It wasn’t the result the home side was hoping for as they chased down a back-to-back hat-trick of wins after their victories in 2017 and again last year. Hampered by the loss of third-line team-member, Lucia Lejeune Vizzini, in the second round when a cracked hoof meant her stallion Loro Piana Filou de Muze had to be withdrawn, they completed on a final scoreline of 23.

However they weren’t the only ones with a hard-luck story. The powerful Swiss team were firmly fancied, but their day fell apart when world silver medallist Martin Fuchs was eliminated in the first round. His 11-year-old gelding, The Sinner, threw a tantrum  as he passed the entrance gate after fence seven, and that meant that the 24 faults collected by pathfinders Pius Schwizer and About a Dream had to be counted. When only eight of the nine starting nations returned in round two the Swiss were not amongst them.

Von Eckermann’s second clear set things up nicely for the eventual winners and when Angelie von Essen and Luikan Q left only the final element of the triple combination at fence nine on the ground they were already looking confident. However Frederik Jonsson’s Cold Play dislodged two rails and also collected a time fault second time out, and in the end it came down to the reigning individual European Champion, Peder Fredricson to clinch it. He knew that a fence down could leave his team in a jump-off against the Irish, so nothing but a clear would do.

And despite being plagued by a severe muscle problem all week, the 47-year-old managed to produce a critical fault-free effort from H&M Christian K when it really mattered. The Irish added eight to their second-round tally and that was a fence too many at the end of the day.

Double-Olympian Von Eckermann, who turns 38 tomorrow, was thrilled with his mare.

“I’m really enjoying this time with my horse, she is in fantastic form and I’m very grateful for Toveks (his sponsors and horse-owners) who keep her for me so I can come to nice shows like this!” said the double-Olympian.

Chef d’Equipe, Henrik Ankarcrona, said having two former Eventing riders in his side was a bonus. “They have a background of keeping their horses in very good condition, they know how to really use the canter in a nice rhythm, so that’s to their advantage” he pointed out, referring to both Fredricson and Fredrik Jonsson, who were also both members of his squad that claimed team silver at last year’s World Equestrian Games. Ph. Simone Ferraro / CONI